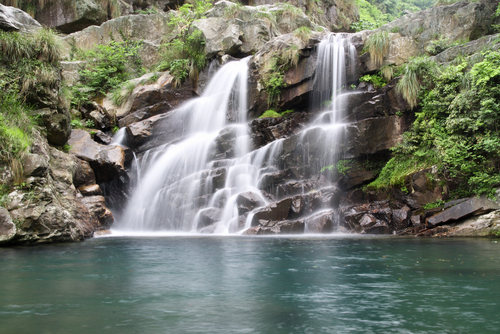 Mount Lu or Lushan known as Kuanglu  in ancient times, is situated in the northern part of Jiangxi province in southeastern China, and is one of the most renowned mountains in the country. The oval-shaped mountains are about 25 km long and 10 km wide, and neighbors Jiujiang city and the Yangtze River to the north, Nanchang city to the south, and Poyang Lake to the east. Its highest point is Dahanyang Peak, reaching 1,474 m above sea level, and is one of the hundreds of steep peaks that towers above a sea of clouds that encompass the mountains for almost 200 days out of the year. Mount Lu is known for its grandeur, steepness, and beauty, and is part of Lushan National Park, a UNESCO World Heritage Site since 1996, and a prominent tourist attraction, especially during the summer months when the weather is cooler.