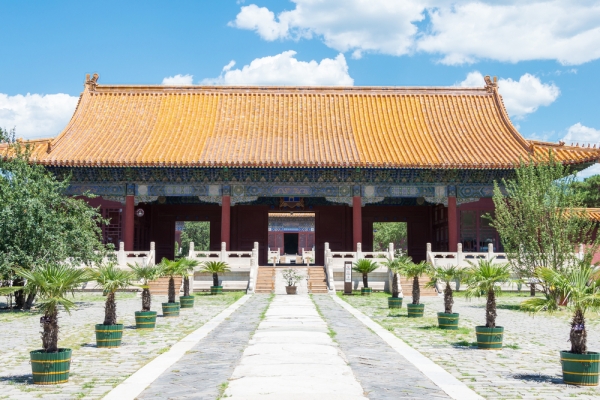 Changling of the Ming Tombs

The Ming tombs are a collection of mausoleums built by the emperors of the Ming dynasty of China. The first Ming emperor's tomb is located near his capital Nanjing. However, the majority of the Ming tombs are located in a cluster near Beijing and collectively known as the Thirteen Tombs of the Ming Dynasty. They are within the suburban Changping District of Beijing Municipality, 42 kilometres (26 mi) north-northwest of Beijing city center. The site, on the southern slope of Tianshou Mountain (originally Huangtu Mountain), was chosen based on the principles of feng shui by the third Ming emperor, the Yongle Emperor. After the construction of the Imperial Palace (Forbidden City) in 1420, the Yongle Emperor selected his burial site and created his own mausoleum. The subsequent emperors placed their tombs in the same valley.