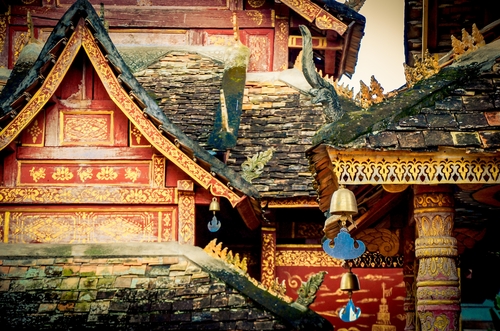 Xishuangbanna is a Tai Lü autonomous prefecture in the extreme south of Yunnan, China. The prefectural seat is Jinghong, the largest settlement in the area and one that straddles the Mekong, called the "Lancang River" in Chinese.
The Six famous tea mountains region located in the prefecture produce some of the most highly regarded Pu-erh tea in the 20th century. Xishuangbanna is rich in nature, historical and cultural resources, noted for its folklore, rain forests, rare plants and wildlife. Its major tourist attractions include Menglun Tropical Botanical Garden, Manfeilong Pagodas,Jingzhen Pavilion, Wild Elephant Gully, Dai people's village at Ganlanba. The Manchunman Buddhist Temple, which has a history of more than 1400 years, is also a very popular tourist attraction. The complex is made up of four parts, the main hall, the sutra collection pavilion, the gold pagoda and the drum tower. The temple is well known within the Southeast Asian region and each year attracts Buddhist monks and visitors fr<